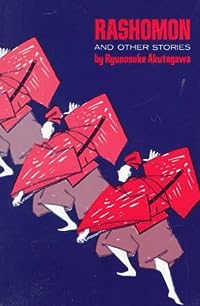 I have just finished reading “Rashomon and Other Stories” by Ryunosuke Akutagawa. I found an old paperback version, published by Liveright 1952, at Third Place Books used for $6.00. The first story, “In a Grove” was my favorite and the basis for Kurosawa’s classic film Rashomon. It tells the chilling story of the killing of a samurai through the testimony of witnesses, including the spirit of the murdered man. All seven witnesses recount the same incident from shockingly different perspectives. The “different perspectives” reminded me of Mr. Parker’s “3 Viewpoints“.

As Mr. Parker explored Kenpo he started making videos, and filmed 12 techniques with Chuck Sullivan. Watching Kenpo on film gave Parker another analytical tool that we use today, analyzing techniques from the three points of view; attacker, defender and bystander.

“Parker said most martial artists concentrate on what they must do in a sparring or fighting situation. “We never take the time to take his (the opponent’s) position to see what opening exist,” he said. ” At the time I’m executing a move, what could he hit back with? Also, could a spectator see an additional thing that could occur but you can’t because you’re too close to the subject?”” “Secrets of the Magician of Motion – Ed Parker” by John Corbett, Black Belt Magazine, July 1979-

This perspective of attacker, defender and bystander is a powerful tool for improving our martial arts skills. It is also a powerful tool for our daily interactions with people on and off the mat. For me, it is a reminder to consider not just my perspective, but that of the person I am interacting with. It is also a reminder to not say, or do, anything that you wouldn’t want a 3d party to see or hear. As part of our staff training I remind our team to never say or do anything with a child that you wouldn’t be 100{1d96d231ab15286cc2909578709a2dba1f05c1bc2821770822e5433a4504f686} comfortable with that child’s parent witnessing.