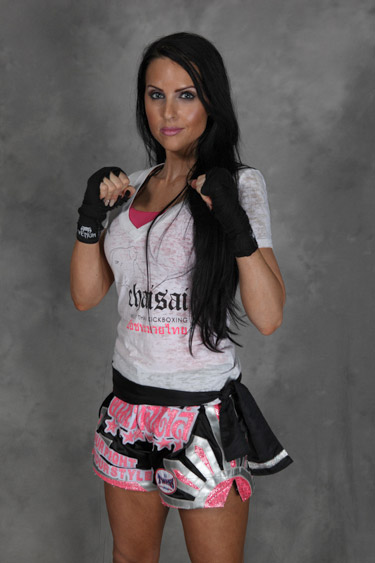 Ariana “Bling Bling” Ramirez is the lead assistant instructor for Chaisai Muay Thai. Known to her students as “Boss Ari”, she has over 15 years of ring-tested fighting experience and is a world Muay Thai champion. She was one of the fighters featured in the Oxygen channel’s hit reality TV docu-drama, “Fight Girls“.

“I started training in 1997 during my senior year of high school in Tacoma, WA. I was looking for a way of staying fit, while learning a street effective form of self-defense. From the very first training session I was hooked. I lived and breathed Muay Thai each day. I was obsessed! I could not get enough of it. I would watch countless Muay Thai fights via satellite on Thai tv and could not wait until the next class.”

Training in a male dominated sport, she fought a lot of stereotypes.
“Back then especially, it was such a rarity to see a female at a muay thai gym. I had to constantly prove myself. Most where military guys and we had a few police officers there as well. I trained alongside them each day doing everything they did. I strived to be technically better”.

Her dedication to her new found love of Muay Thai caught the attention of her trainer.

“After only three months into it, I had the opportunity to fight in Las Vegas on Master Toddy’s very first US promotion that featured women fighters. This was in November of 1997. We took a major leap of faith into the fighting world with me, given my lack of experience and time spent training, but I was born a fighter. It ignited a fire inside me, and I have been passionately committed to the sport of Muay Thai ever since”.

The wife to Master Kru Alberto Ramirez, she is excited to be teaching the muay thai program alongside her husband at Alpha Martial Arts.

“I look forward to teaching and inspiring the next generation of female Muay Thai enthusiasts, and future champions in Seattle.”